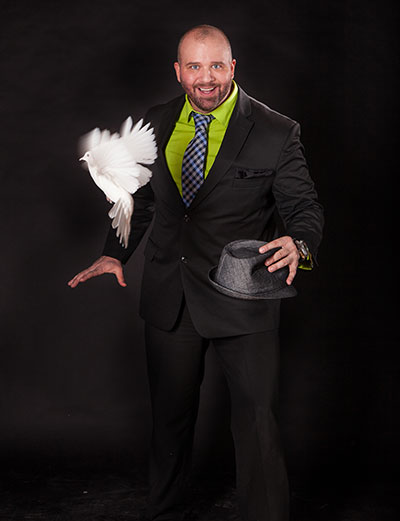 Born and raised in Chicago, Mike DiDomenico learned his first magic trick from his grandfather, an amateur magician himself. Since those early days, Mike has devoted his life to the study, appreciation, and presentation of magic, combining classic illusions with a contemporary edge.

A specialist in both stage illusions and up close magic, Mike has performed professionally, both locally and nationally, for almost 20 years. His stage presence is undeniable: trained professionally to dance, Mike incorporates his balance and poise into all his illusions; the holder of a second-degree Black Belt in Tae Kwon Do, Mike’s natural discipline and confidence are the perfect accompaniment to any illusion, big or small.

Unlike many magicians today, Mike strikes a perfect balance between the old and the new. He is always able to reinvent himself, but does so with deference to the tenets of the profession. From his award winning, classic illusions with cockatoos and snakes, to his slick, right under-your-nose magic, Mike will perform to the audience’s delight. His comic edge has guests laughing as they try to figure out what just happened. It is a true world class act that Mike can even personalize to a New York style lounge set up with a portable bar where he serves up laughs, magic, and beverages, all at the same time.

Mike’s work and reputation speak for themselves. From his stage work for the Make-A-Wish Foundation, Verizon Wireless, and Sanp On Tools to his performances for the Chicago Bears and Absolut Vodka, Mike’s performance diversity lends itself to any occasion. Mike has opened for actor/comedian Steve Harvey and for star The Office, Craig Robinson. Whether on the big stage or as part of the crowd with walk up magic, Mike captivates audience members with his electric presence and his person-to-person charm. His repertoire and professional demeanor ensure the perfect show for any audience, every time.